In September 2015, the Minister of Foreign Affairs and International Development tasked Olivier Poivre d’Arvor with promoting and developing France’s cultural attractiveness. It was within this framework that Le Grand Tour has been designed and organized, with about 40 stages in Paris and the rest of France between January and July 2016.

France remains the world’s number one tourist destination due to its rich and varied territories, extensive cultural events and ability to welcome other cultures. Visitors can choose from over 1,200 museums, 1,500 festivals, 14,100 listed monuments and 41 UNESCO World Heritage Sites. As the “bookshop of the world”, all types of foreign literature and ideologies are translated into French. France is a cosmopolitan cinema, an art gallery, a theatre and a land of festivals, as well as being the third ranked destination for international students, with over 300,000 foreign students each year.

The aim of Le Grand Tour is to highlight and illustrate this wealth of French culture throughout the country, and to develop and stimulate it to make it even more attractive. All cultural actors want to embrace Le Grand Tour: by so doing they can make it, for the network and the operators of the Ministry of Foreign Affairs and International Development, a way to promote their work in France, abroad and in the territories, and to make the largest festivals which are open to world cultures and labelled as partners essential tourist locations for the French cities and regions hosting them.

The interactive map of all stages of Le Grand Tour 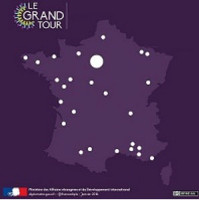 “With over 40 stages throughout France, this Grand Tour is as much aimed at French people to make them aware of the international value of these exceptional cultural events and the importance of developing them, as it is at people from around the world who want to visit France from a different perspective.” Olivier Poivre d’Arvor, Ambassador responsible for the Cultural Attractiveness of France From the Night of Ideas to festivals focusing on books, cartoons, the art of gardening, dance, theatre, cinema, music and plastic arts, see every stage of Le Grand Tour on our interactive map.

The passport for cultural attractiveness 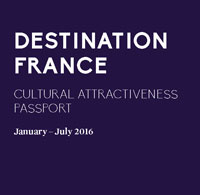 The Grand Tour program-(PDF 873,4 ko) will be available in many languages in all countries where French embassies and their cultural services make efforts to encourage foreigners to visit France. As a result, tens of millions of people around the world will see this schedule and map.