A delegation from ISA-LILLE visited KNUST

A delegation from ISA-LILLE (Lille Institute of Agriculture - Catholic University of Lille), was in Ghana from May 9 to May 13, 2016 for an important visit during which discussion was held on the establishment of a dual degree program “Master Fast Track” ISA-LILLE and Kwame Nkrumah University of Science and Technology (KNUST), Kumasi.

The visit, which would eventually lead to the signing of a partnership agreement, was as a result of an earlier visit of ISA-Lille representatives to Ghana during the France-Ghana higher education conference organized in June 2015.

The discussions on this partnership agreement, which falls within the Ghana-France university cooperation, is fully supported by the French Embassy in Ghana, who seeks to establish partnerships between French universities and their Ghanaian counterparts in different areas such as student exchange programs, exchange of academic staff, co-supervisions of PhD thesis, dual degrees etc. This is why Jean-Luc Mure, the Head of Cooperation, was in Kumasi on May 11, to meet the representatives of the two universities and to also reaffirm the support of the French Embassy. The visit of ISA-Lille was facilitated by Céline Verhaeghe, the Coordinator of Maison Française and Campus France branch at KNUST, who is also a staff of the Cooperation and Cultural Department of the French Embassy. 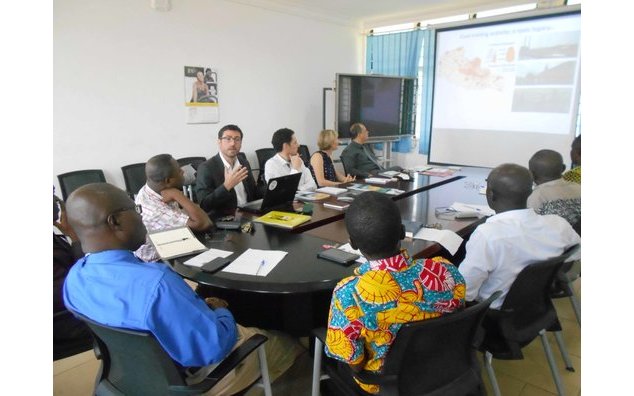 ISA-Lille has over the past years trained several brilliants Bachelor degree holders from KNUST in its Agro food processing and environmental sciences master’s degree programs taught in English.

It is in this light that ISA-Lille wishes to establish a new degree program called “Fast Track” master’s program with KNUST.

The “Fast Track Masters” program is based on an integrated 5-year degree program during which a student spends 3 years at KNUST and an additional 2 years at the Lille Institute of bio-engineering. At the end of the 4th year, KNUST awards its Bachelor’s degree and ISA its masters at the end of the 5th year. ISA-Lille has already established similar degree with its partner universities in the U.S which has been a success. The program intends to reduce the number of years students spend in school and therefore, reduces the student’s financial burden by a year.

The ISA-Lille officials also visited the Department of Food Science and Technology and the Department of Theoretical and Applied Biology (environmental science section) at the College of Science, where discussions on running the dual degree programs were held.

They met the Pro-Vice Chancellor of KNUST and also visited the College of Agriculture and Natural Resources, where an already signed partnership is being implemented.